Our household abso-freakin’-lutely loves HBO’s Westworld. The story, the acting, the sets—it’s all perfect in our book. And the costumes. From the moment I set eyes on Evan Rachel Wood as Dolores Abernathy in that dreamy blue dress, I knew I simply must recreate it. And, in honor of Halloween, recreate it I did, along with some Teddy togs for my husband, Zach. 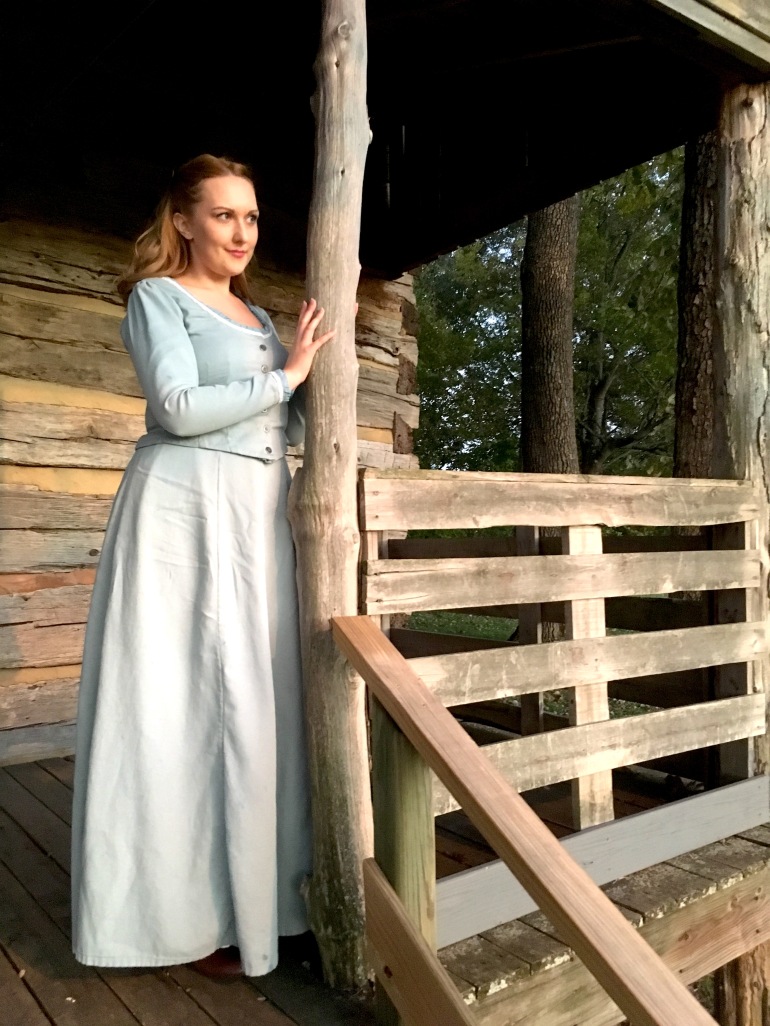 But first, a quick word about dressing as a character from a beloved show: I know some people are very much into screen accuracy and nailing every single detail for cosplays and such, and that’s awesome! I love seeing these types of getups on my social feeds. But if it’s straight-from-the-set fabrics and details down to the button placement that you’re looking for, I’m not your gal. I’ve seen a lot of nasty comments on other people’s costumes (and that’s what mine is—not a cosplay) this year, and it really bums me out to see someone’s hard work criticized because they wore a bandolier on the wrong shoulder or something trivial like that. Be nice or leave–and go construct your own dang reconstruction-era holster from leather you tanned yourself if that’s your thing.

That said, drafting this dress was, surprisingly, not much of a chore. I cheated and referenced a couple of patterns I already owned for the pieces: a lengthened, ruffle-less skirt from Simplicity 1819 and the top from McCalls 6467, the back panels of which were almost exactly the shape I needed. Shaping the neck was even easier than I expected—it’s not the exact shape of the costume from the show, which is higher in the back and narrower near the shoulders, but for my purposes it works just fine. 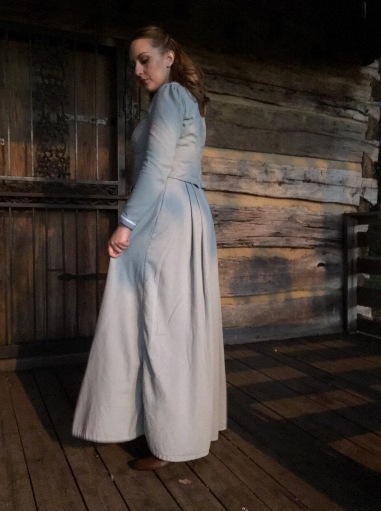 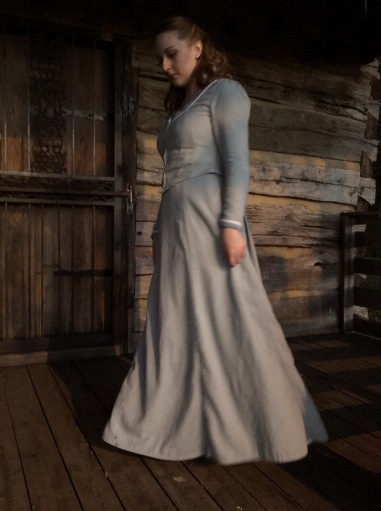 I found the perfect buttons for both my and Zach’s costumes at Joann Fabric and Craft, and the trim at my neckline as well as the eyelet at the petticoat’s hem are from there as well.

The most difficult part of creating my costume by far was the dyeing process. I used some 100% cotton for this dress that was a light beige color, so the challenge was in covering that while still achieving the right color. I experimented with a few combinations of Rit Dye – one of which resulted in an awful bright, cotton candy blue – until I settled on using an undoctored bottle of Evening Blue. Not an exact match for the darker, dusty blue color of the real McCoy, but again, it gets the job done. (Plus, bleaching the dye out for a third time was not an appealing option to this sewist. Because time and sanity > accuracy.)

Zach’s jacket was thrifted—a fortunate find. I replaced the stodgy gold buttons on it with these more rustic metal ones. His waistcoat is an upcycled wool skirt I found, accented with shell-like buttons.

Did you dress up as a TV or movie character this year? I’d love to hear about your costume! Tell me in the comments.

I’m a maker dedicated to crafting a handmade wardrobe and sharing my journey along the way. View all posts by Megan

Thanks for stopping by! I’m Megan, a maker on a journey to a handmade wardrobe. I’m here to document my progress (and the occasional road bump) while sharing tips and tricks I’ve learned along the way!

This blog contains affiliate links, which means I may receive a small compensation for purchases made—at no additional cost to you!
Learn more